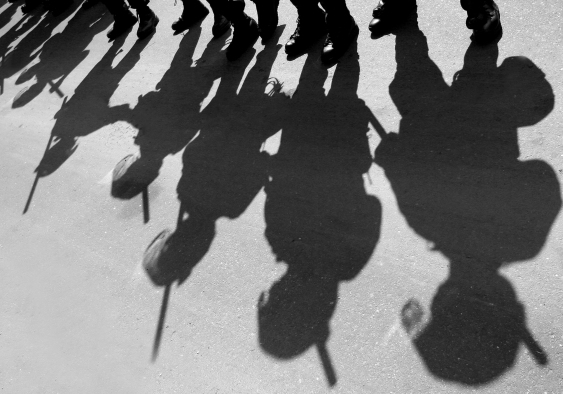 Walking down a dark, creaky hallway is often scarier than the monster behind the door at the end. My fear grew, wondering what was at the end of the hall I created, or in reality behind a door and on a balcony above.

The lobby and bar slowly began to fill one or two guests at a time, mostly dressed in lederhosen and dirndl. There was almost a festive air, but the presence of law enforcement was a bit distracting. People posed for selfies, and discreetly shot pics of the police. I don’t think anyone knew I was involved. I sat quietly by the window drinking water. Jessica joined me at last, finally someone to make small talk with. “It’s getting cold outside,” for example, or “I like your Oktoberfest outfit,” or “Why does that SWAT team guy keep looking up at the balconies?”

And then more police showed up, pulling more weapons and helmets out of their squad car trunks.

“Jeezus,” I said, and picked up my empty water bottle.

The original officer I met came out of the security room behind the front desk, motioned for the other policemen, and moved to the elevator between the lobby and bar. The doors opened, and they stepped in. Well, most of them. Riot gear is bulky. Those left behind caught the next elevator up.

“That’s funny,” I said to Jessica, licking my dry lips.

About ten hours went by in the span of about ten actual minutes. I wanted a drink, but thought it prudent to see the situation through with a clear head. Or at least as clear as it could be in the surreality. Each time the elevator opened I expected to see: a) a criminal being dragged out, b) the cops empty-handed, but still looking, or c) the cops empty-handed, shaking their heads at me and the hand I had in false accusations and time taken away from the police force.

I would’ve chosen (c) on a multiple choice test, but did I really have a choice in the matter? We weren’t that far from Paris, or Brussels, after all. Terrorism, just like shit, happens. I found some resolve among the second guesses, planted my feet, so to speak, and waited.

The elevator doors opened and the cops came out empty-handed. The officer headed in my direction shaking his head.

“Everything is okay,” he said. “There is no danger.”

I wondered if I’d be charged, if I’d be arrested for my ignorance.

“You were right,” he said, “It was a rifle. But he has a very strong permit.”

I said, “You can bring a gun into a hotel in Austria if you have a permit?”

“No,” he said. “They are angry with him. He should have checked the gun in with the hotel.” He looked over at the registration desk. “We have taken care of the situation. It is safe.”

And that was that. The SWAT team left, but not before posing for photos with a few lederhosen-clad Austrians.

The security guard thanked me after the officer left, and asked if I’d like a cup of coffee “on the house”.

Fortunately, Oktoberfest was next door.